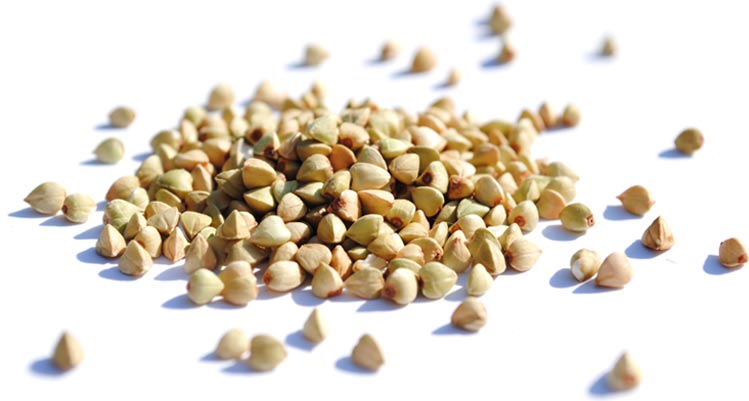 For the production of the traditional buckwheat pancakes blinis, porridge, in the meatless kitchen, to vegetables and for roasts.More…

Annual, depending on region from summer to autumn.More…

Buckwheat (bot. Fagopyrum) is a pseudo grain of the knotweed family.More…

The annual world harvest is about 2.5 million tons. Over 95% of this is traded by the ten main producing countries.More…

Buckwheat is a thousand-year-old cultivated plant that contributed to survival as a staple food. In commercial cultivation, buckwheat is cultivated for one year and the parts of the plant mown after harvesting are returned to the natural cycle.More…

Buckwheat should be eaten peeled, as the reddish skin can cause allergies. Fagopyrism causes skin reactions when exposed to sunlight.More… 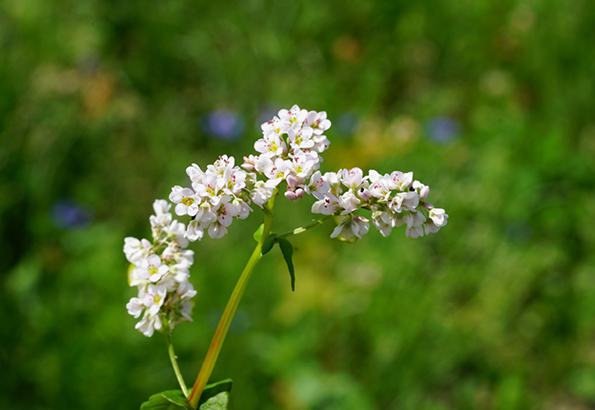 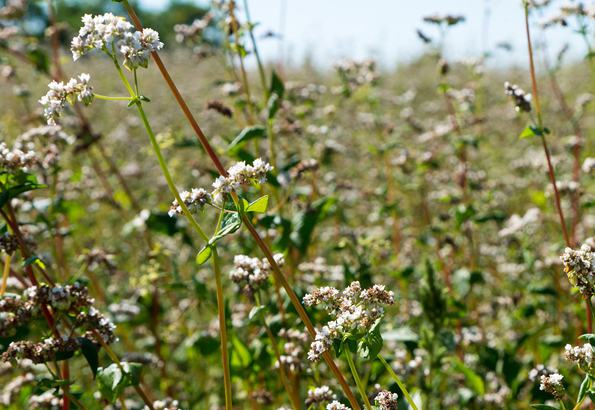 Grützen and the well-known Blinis stand for traditional processing. But organic buckwheat is also an ingredient that is becoming more and more popular in modern, nutrition-conscious cuisine. Buckwheat is added to soup, it complements vegetable pots and bratlings and tastes good as an ingredient in bread. From Japanese cuisine we know buckwheat noodles, which are appreciated in gluten-free cuisine. As topping or in muesli, freshly roasted buckwheat adds a crunchy nutty note.

As a knotweed plant, buckwheat is related to rhubarb and sorrel. Buckwheat grows year-round or perennially. It forms herbaceous plants, and in natural habitats it also grows as a semi-shrub and dwarf shrub. On the upright stem, grape-like or umbrella-shaped inflorescences appear after a few weeks. The mostly hermaphroditic flowers are pollinated by the wind.

During the summer, beechnut-shaped fruits form on the grapey fruit stalks. This form is probably what gave buckwheat its name Fagopyrum – from Latin fagus for beech – and Greek pyros for wheat. In contrast to wheat, buckwheat is gluten-free. As more and more people suffer from gluten intolerance, the demand for this pseudo grain is increasing.

Trivial names such as tartar grain or heather grain indicate the location and natural range of buckwheat. It thrives throughout Europe and also tolerates sandy, steppe and nutrient-poor soils. This characteristic made it a food for poor people, who could sow it on the smallest spot of their own earth. For consumption, buckwheat (Fagopyrum escolentum) is cultivated.

More and more producers around the world are opting for organic farming. This also applies to the cultivation of buckwheat. In Germany, too, more attention has been paid to traditional food in recent years. Buckwheat, however, loves warmth. In cooler regions, sowing can therefore only take place when night temperatures no longer drop below 10°. The short ripening period of ten to twelve weeks makes up for this.

The cultivation of our organic buckwheat complies with all organic guidelines. This gives microorganisms and insects the chance to feel at home again in their natural habitats. Buckwheat protects against wind and erosion. It is a good food for bees and has proved helpful in the fight against soil pests such as nematodes. Buckwheat also contributes to food security. It is not affected by diseases that damage sweet grasses, all ahead of maize, rice and wheat, and lead to crop failures. Consumers who need a gluten-free diet will benefit particularly from our gluten-free wheat.

In most areas, buckwheat is harvested from the end of August to the beginning of September. As soon as the herbaceous parts of the plant and the leaves show signs of exhaustion and turn yellow, the ideal harvest time has come. The plants are mown by machine and the small nuts are threshed out. After drying and peeling, depending on how they are used, they are sold.

Our peeled organic buckwheat is mild and reminiscent of nuts.

At around 1.2 million tonnes, Russia supplies half of the world’s harvest. Other main producers are China, Ukraine, France, Poland, Kazakhstan, the USA, Brazil, Lithuania and Japan.

Due to its high lysine content, buckwheat protein is considered particularly valuable. Organic buckwheat is rich in complex carbohydrates and has a low fat content. In the peeled nuts it is just 1.7 g. The content of minerals and vitamins also makes organic buckwheat a healthy food. However, it should not be eaten unpeeled because of the allergenic skin.