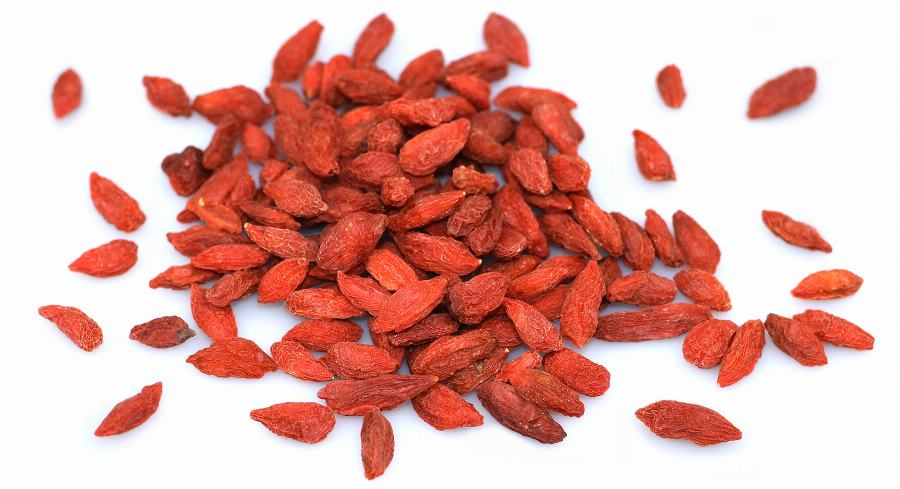 Goji berries are processed into food supplements and cosmetics, they taste pure in muesli and fruit salads, as snacks, baking and cooking ingredients.More…

Depending on the growing region from August to October.More…

Goji berries are the fruits of the common buckthorn (bot. Lycium barbarum).More…

The whole area between Southeast Europe and West Asia.More…

Like any other super food, goji berries are always a pretext for discussion. Although the transport routes for this Asian berry are usually high, organic cultivation and fair trade in the producing countries do a lot to ensure sustainability in food production and to secure the future of the population.More…

Goji berries have long been appreciated in Ayurveda and Traditional Chinese Medicine TCM. The red berries are also popular in Chinese cuisine.More…

Goji berries are processed as food supplements into pellets, capsules and powder. Because of its fruit acids it is a popular ingredient for cosmetic products. The red fruits are a popular tea ingredient. Juice from goji berries is considered pure superfood, its sour taste is an excellent thirst quencher. Goje berries taste great in mueslis, fruit preparations, jams and student fodder. Wholemeal biscuits with goji berries are particularly juicy and real fans always have the bag with the pure berry snack with them.

The red berries grow on the common buckthorn (Lycium barbarum). It is a plant species of the buckthorn genus, which in turn belongs to the nightshade family. Other names for the common buckthorn are common buckthorn, common devil’s twine or witch’s twine and Chinese wolfberry. From the English-speaking area comes the designation Goji berry, which was taken over now also with us in such a way.

The deciduous shrub grows to heights of between 2 and 4 metres. The rod-shaped branches carry some thorns. When flowering the affiliation to the nightshade plants can be clearly determined, they remind of potato blossoms, but above all also of the blue to violet flowering bittersweet nightshade. The flowers, which usually stand individually on the long shoots, develop into slender, oval berries that turn red-orange or red when ripe.

The common buckthorn is extremely cold-resistant. Frost to -25 ° cannot harm it. It also makes little demands on the soil, only salts and heavy metals damage it.

The original home of the common buckthorn can no longer be determined exactly. It grows in natural habitats from south-eastern Europe to China, although it is increasingly found in certain regions such as Ningxia in China. Its characteristic, which is extremely proliferated, especially by root runners, but also by the branches lowering and the berries sowing, makes an exact determination of the origin of its original form impossible. Goji berries are cultivated in Asia, Europe, North America, Australia, New Zealand and North Africa. However, the buckthorn is also widespread in the Mediterranean region.

The common buckthorn is a good bee food. Its fruits serve as animal food, the animals in turn ensure the spread of the seeds. The shrub also provides food for some butterfly caterpillars, especially swarms such as tobacco hawks and skull hawks. Due to its strong root runners, buckthorn is suitable for planting dams and slopes. There it makes a valuable contribution as natural erosion protection. We source our organic goji berries from certified cultivation. Sustainability in processing, fair trade and high product quality are also important to us.

The harvest of goji berries is not for the tenderest of tempers. The long shoots are at least covered with single thorns. However, with a little practice and safety at work, the harvest is a success. The fields are repeatedly cut as the red berries ripen at intervals of six to eight weeks. The goji berries collected by hand are cleaned and dried. In China, they are sold fresh and young leaves are prepared as food.

Goji berries are fruity, finely sour, they are reminiscent of dried cherries or cranberries.

Cultural cultivation is on the rise. Harvesting is to be simplified by breeding new, thornless varieties. Currently, the yield is around one kilo per shrub.

Although goji berries have long been used as a herbal remedy in Asia, the European Food Safety Authority has not yet approved any health claims. The strict scientific requirements have not yet been satisfactorily met.