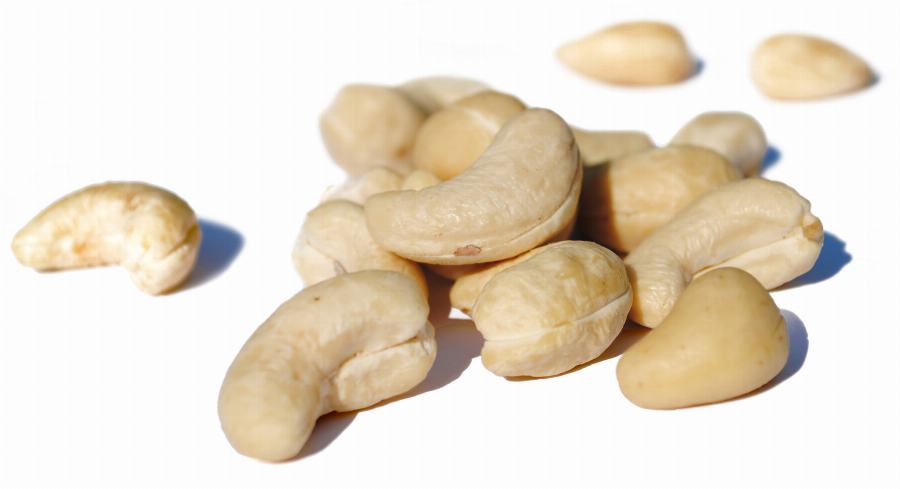 In Asian and exotic cuisine, for nibbling and baking, for spreads and for the production of vegan milk and cheese.More…

Stone fruit (nut) from the cashew apple, the fruit of the cashew tree.More…

Mild, nutty, with typical, aromatic taste of its own.More…

Up to 30 kg per tree, about 5 million tonnes per year worldwide, 25% of which come from Vietnam.More…

Cashew trees carry for years. Nothing from the harvest is lost: the fruits themselves are processed into juice and jam on site. Drinks made from them are also popular. Oil is extracted from the middle part of the fruit’s shell. In the countries where cashews are grown, the cultivation of cashews is an existential source of income.More…

The nuts with their striking form are versatile to use, they are rich in protein and provide many valuable minerals.More… 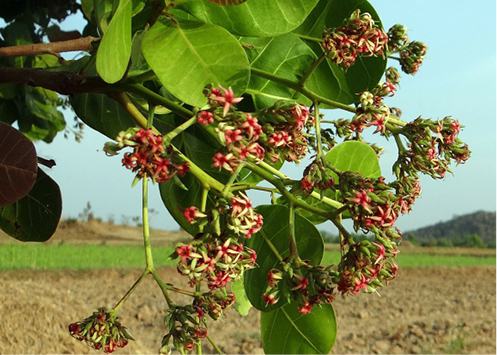 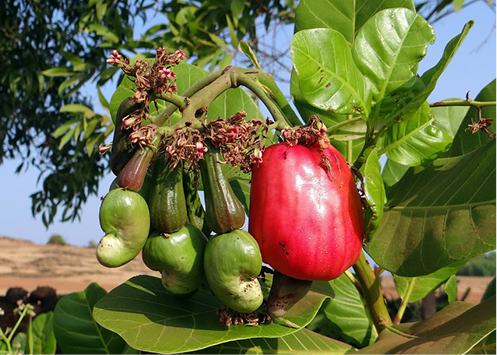 The cashew tree (Anacardium occidentale) probably has its popular name because of the kidney-shaped shape of its kernels. It derives from Caju, the Portuguese name, and the Indian Acaju, which means kidney tree. It was also the Portuguese who were the first Europeans to discover this tree in Brazil’s forests and who, like the locals, took advantage of cashew apple and cashew kernels. The evergreen tree from the sumac family reaches a height of up to 12 metres. What is striking about the growth is that the tree grows irregularly in exposed locations due to the influence of the wind and thus adapts to the conditions. Deep tap roots and extensive lateral roots ensure that the cashew tree also copes well with prolonged drought. After insect or wind fertilization, the cashew fruit is formed from the annually forming panicles. Both male and hermaphroditic flowers grow on a tree so that sufficient fruit set is guaranteed. Cashew nuts grow as an extension on a fleshy, thickened fruit stalk known as the cashew apple. The green, partly also brownish fruit peel of the cashew kernels is separated from the stalk during harvest. Cashew apple and cashew nuts are processed separately. Jellies, jams and drinks are made from the apples in the country of production. They are fruity, sweet and rich in vitamin C. Even the middle fruit wall of the cashew fruit does not remain unused. It is the source of valuable shell oil, which can be used for many medical and industrial purposes. It is a component of lacquers and can be polymerized to a heat-resistant latex.

The Cashew tree has its home in the northeast of Brazil. Portuguese sailors and commercial travelers discovered the valuable tree there and recognized its advantages. They introduced it to India and Mozambique in the 16th century. When the demand for the products increased, cashew trees were cultivated in plantations. Wherever there is a tropical climate, commercial culture now takes place. The cultivation became particularly popular in Africa, since the Cashew tree gets along with the climatic and nutrient-conditioned circumstances there in the best way. The harvest is also processed outside the cultivation areas. In order to secure the income of the local farmers, all African countries increasingly attach importance to the fact that the processing also takes place in the cultivation area. Nevertheless, Vietnam has become a major cultivation area. From there we obtain our organic cashews in proven quality.

The long-lived cashew trees are not only a nut supplier, but also make a valuable contribution to the preservation of the landscape as wind and erosion protection. This property was also the reason why the Portuguese brought the tree to India. In addition to nuts, the fruits are also used, and the shell oil from the cashew fruit’s skin is the raw material for a number of products. As oil it is used industrially and medically, it is further processed to latex and technical resins. Its diverse use makes a significant contribution to sustainability.

There is only one nut at the end of the cashew apple. During the annual harvest, the nut is separated from the fruit. The nut is then removed from the hard shell in an elaborate process. This process is decisive for the quality class of the kernels. Whole, undamaged nuts are traded at a higher price than fragments. They have a longer shelf life and the ingredients are preserved to a greater extent. Depending on their other uses, cashew nuts are sold raw, steam-treated, dried or roasted.

Organic cashew nuts convince with their full, nutty aroma. They are mild and leave a pleasant aftertaste on the tongue.

Cashew trees in the best yield condition provide a quantity of around 12 to 15 kg of nuts. The fruit is first grown at a tree age of three years. After a growth period of 30 years, a plantation has to be renewed. This is done by clearing or sawing off the old trunk and grafting a new shoot. Worldwide, around 5 million tons of cashew nuts are produced every year. Vietnam is at the peak of production with about 1.2 million tons. The African growing countries together supply a further 2.5 million tonnes.

Organic cashew nuts are well tolerated. Allergies are less common than with other nuts. With their fat content of around 42 percent, cashew nuts also differ from other types of nuts. They are regarded as a high-quality source of protein. The vitamins of the B group and folic acid are contained in the nuts. The minerals magnesium, phosphorus, potassium and iron, which are also present in large quantities in cashew nuts, are particularly important for the human organism. 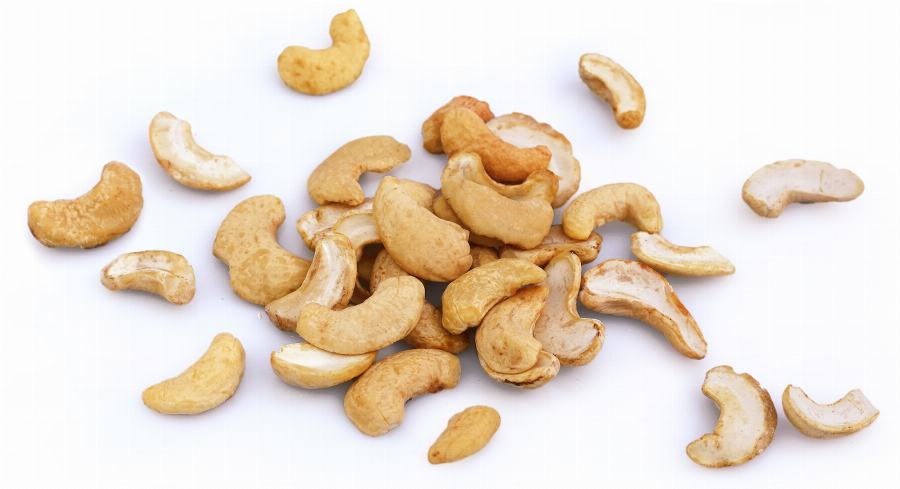 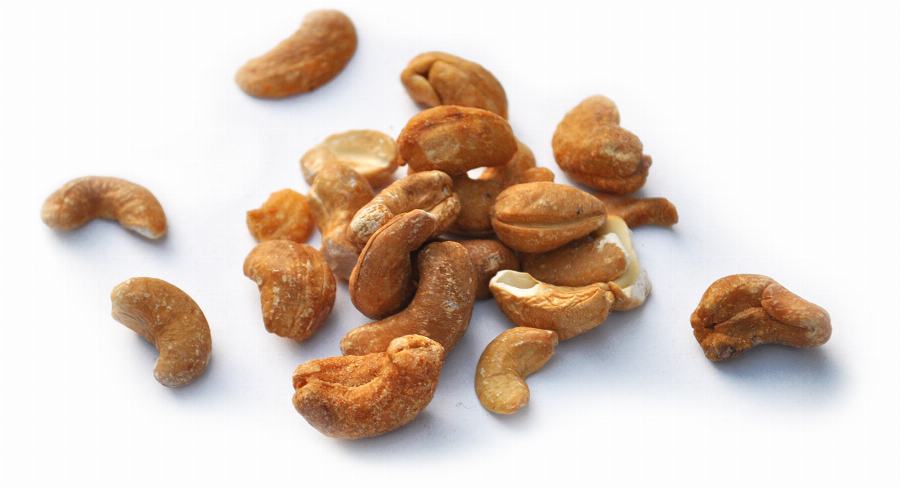 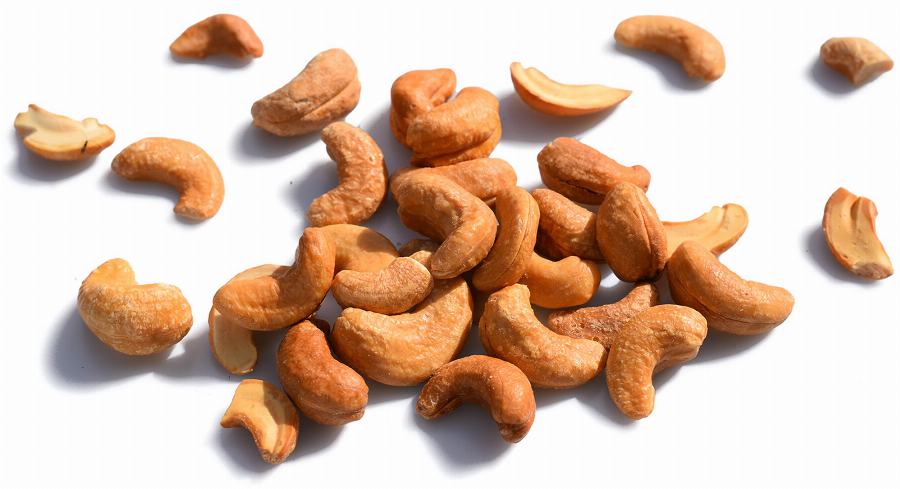 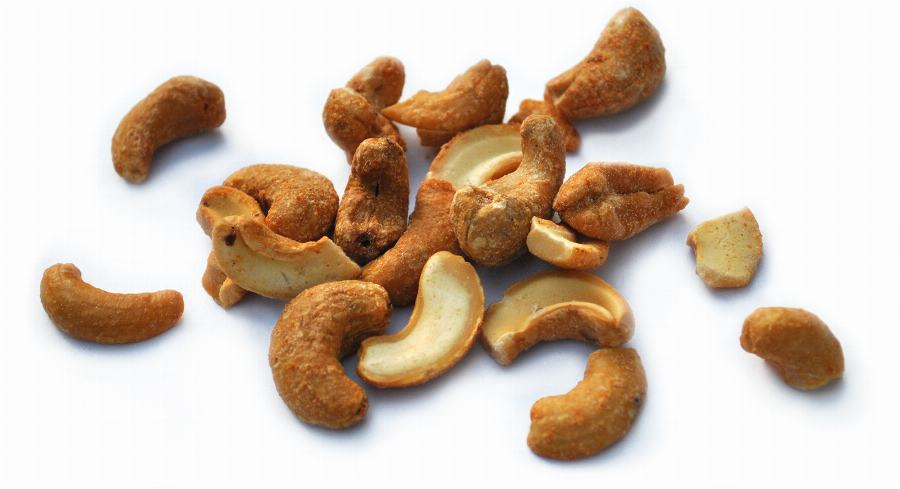 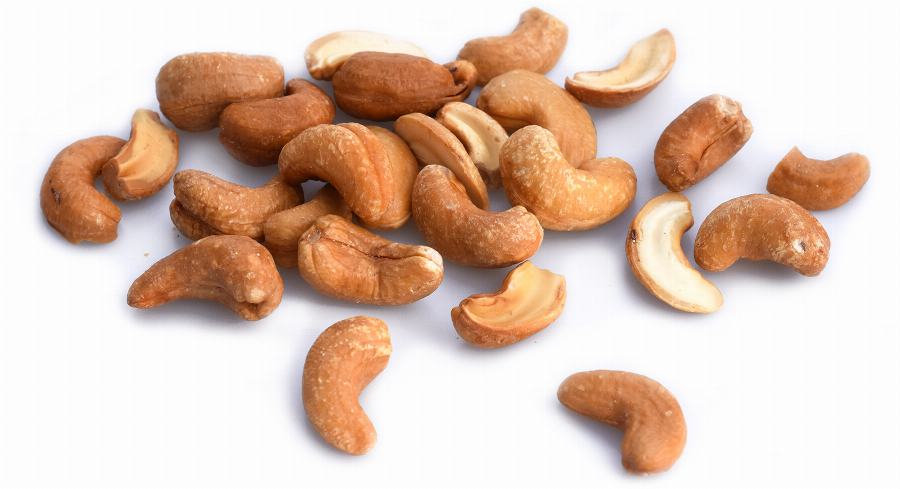 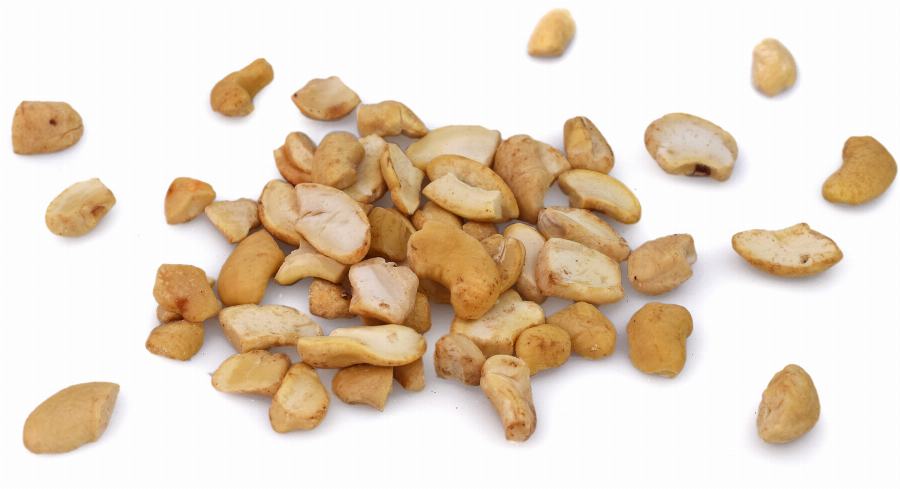