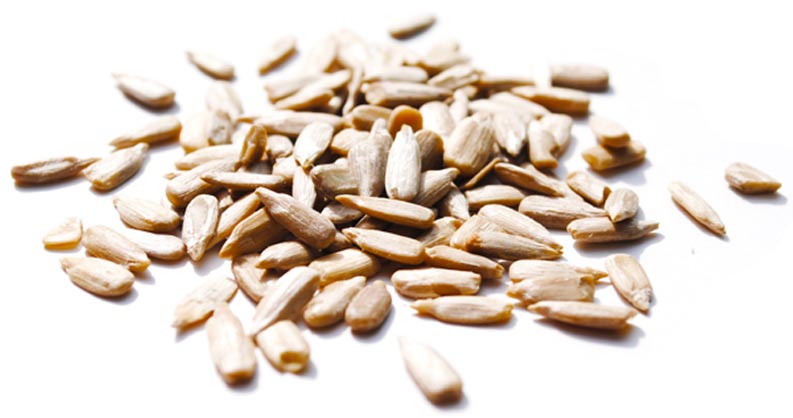 As an ingredient in baked goods, for the production of oil, as a snack in mueslis and nut mixtures, as a topping for salads, in vegetable dishes and risottos.More…

Annual from late summer to autumn.More…

Crunchy nutty, with a distinct taste of its own.More…

The pollen of the flowers is an excellent bee food, an especially aromatic honey is obtained from the sunflowers. The seeds serve as food for all kinds of animals in the field. After harvesting, any remaining plant remains of the sunflower are returned to the natural cycle.More…

With 22.5 g protein, peeled sunflower seeds are an excellent source of protein.More… 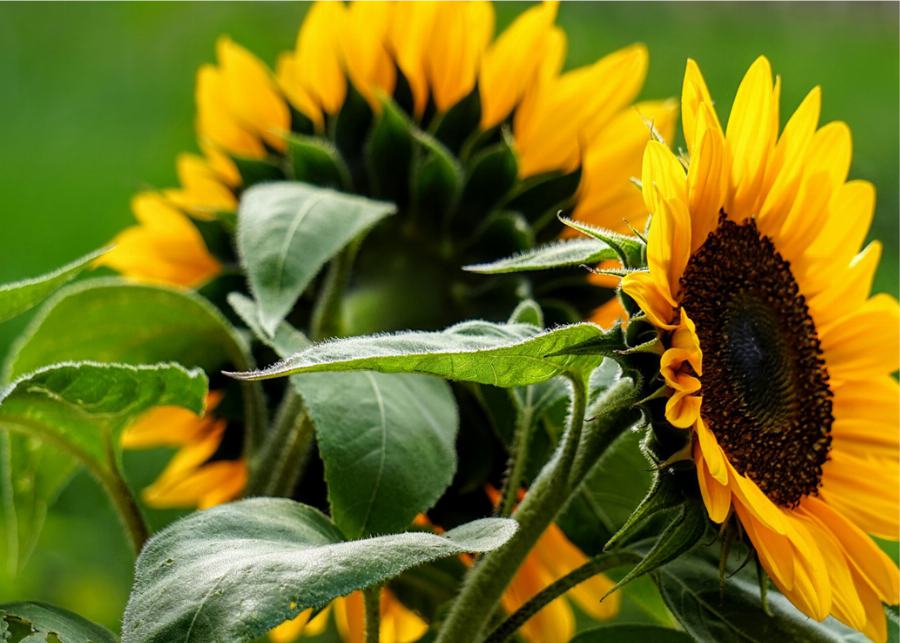 Oil pressing and animal feed: These two uses come to mind immediately when the keyword sunflower seeds is mentioned. Our organic sunflower seeds are also a delicious ingredient for the kitchen. They complement mueslis and ensure crispy enjoyment in biscuits. Bread and rolls become a protein bomb with a fair amount of organic sunflowers. The light-coloured seeds are also popular as a topping for salads and soups, as a crunchy ingredient for vegetables and rice dishes.

Sunflowers grow as annual, herbaceous plants. They reach a height of 1 to 3 m. The rough stems are strong, they have to bear the weight of the filled basket bottom, which is not insignificant. The root growth corresponds approximately to the length of the above-ground part of the plant. The tap roots grow to a length of up to 2 m, which contributes to an adequate water supply.

Sunflowers love warmth and also heat buckets. Cold soils and especially late frosts lead to crop failures. Helianthus also needs plenty of light to thrive. If the rows are too small, the plants develop poorly. A typical feature of sunflowers is their ability to align themselves with the sun. Even the cotyledons are hungry for the sun, at night they collapse as if to sleep.

The yellow, striking outer petals appear at the edge of the basket bottom. These leaves are sterile, only the inner disc flowers can be fertilized. They are hermaphroditic, pollinated by their numerous visitors from the insect world. Even the nectar of the sunflower follows its name: it has the highest sugar content in the sunny midday hours.

Sunflowers spread from North and Central America to all temperate zones. Already around 2500 B.C. the stately flower was known by the Incas. It was regarded as the image of its sun god. It was Spanish sailors who brought the sunflower to Europe in 1552. The seeds were first sown as ornamental plants. However, the value of sunflower seeds was quickly recognized. Towards the end of the 16th century it was mentioned in herb books. The sunflower is cultivated commercially wherever a balanced climate promises a good harvest. These are above all regions in which maize also thrives. Our organic sunflower seeds come from certified organic cultivation. They are processed fresh from the harvest, are fully aromatic and contain valuable ingredients.

We do not use insecticides or other pesticides in the cultivation of our organic sunflower seeds. In sunflower fields, for example, a microclimate thrives that provides home and food for insects, insects and small mammals. Pectin is extracted from sunflower baskets and is partly used for the production of animal feed. The other plant parts of the sunflower can be chopped and used as compost and soil conditioner.

Sunflower seeds ripen on the basket bottoms from the outside to the inside. The correct harvest time is reached when the inner seeds can be cracked but are still soft inside. The organic sunflowers are harvested mechanically. Specially equipped combine harvesters or specially designed sunflower cutters are used. After threshing, sunflower seeds must be dried.

Nutty and mild, the typical taste of its own intensifies during roasting.

The main producers of sunflower seeds are Ukraine and Russia. Worldwide, the annual harvest is around 48 million tons. Typical European growing regions are Romania, Bulgaria, Hungary and France. Sunflowers are also increasingly being cultivated in Germany, but the harvest is not worth mentioning compared to world production.

Sunflowers are compass plants, they align the budding flower baskets with the sun. The sun’s cycle is thus followed throughout the day. As soon as they bloom fully, this property is lost. The fruit stands almost always point to the east. 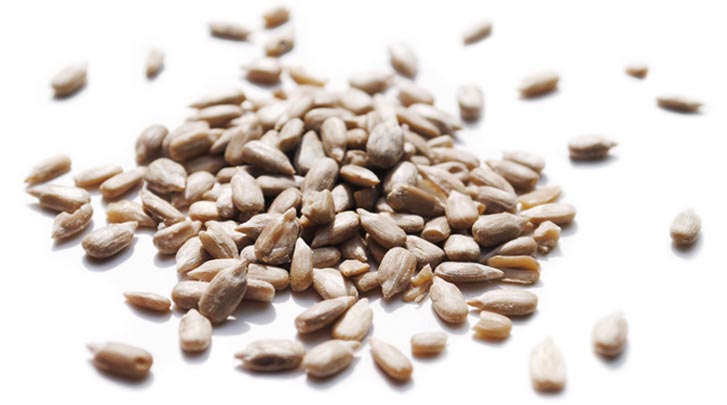